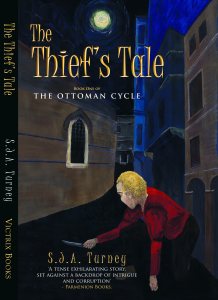 Buy It in the UK!

Buy it in the USA

Last year, before the ‘Pen and Sword’ tour even launched, I took a few days in Istanbul with one of my oldest friends, Steve Callahan, and my wife Sarah.  When we met up with Steve, he told me he’d been reading Simon (SJA) Turney’s Ottoman trilogy on the plane.

This caused immediate feelings of guilt. Robin Carter (Parmenion) reccomended ‘Thieves Tale’ when it came out, and I’d liked it, but as the tech-incompetent I truly am, I’d bumbled–something–on my e-reader and lost it.

However, when ‘Pen and Sword 2014’ was done (and we’re doing it again this year for anyone looking for a great vacation with swordplay in early November 2015) I was determined to get back into it.  My e-reader was still unforgiving, so I read the whole thing on my computer screen when I should have been editing Tom Swan (who also spends time in a slightly earlier version of Istanbul).

Wow.  Delightful.  I think that the best thing about this series is the author’s authenticity and his knowledge of places and events.  Side note–next to reenacting (which, oh, by the way, SJA Turney also does), travel is the next best teacher for the historical novel.  Turney knows Istanbul with an intimacy that I admired every page.  All his locations are real, or easily conjured even in the modern street scape of the city. 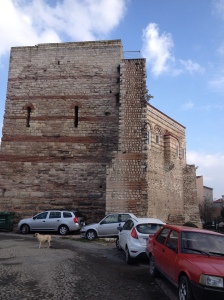 That’s the Palace of Blacharnae.  I didn’t take the ‘Turney’ tour and I missed some of his locations, but those I did see were fantastic, evocative, and just made his stories all the better.

Oh, and now a word on plot.  I loved the plot. I’ll avoid spoilers and say–this is NOT Military History.  In fact, it’s somewhere between ‘Thriller’ and ‘Mystery’ and it is all based on real events.  Turney also avoids almost all of the tropes that can beset our genre–Turks are not ‘evil’ and Christians are not ‘good.’  The people of Istanbul are just people, and the character–a Christian Greek–goes through a story long realization that life in Ottoman Istanbul could be a lot worse…which I loved. 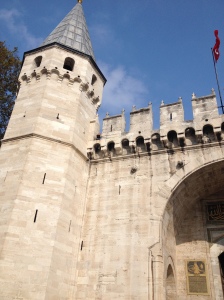 The gate to the Topkapi Palace

As an aside, that’s a picture of the gates of the Topkapi Palace, and somehow, they made me think I’d strayed into the French Loire.  It is quite clear when you are in Istanbul that East and West were busy emulating each other as fast as they could.  And for armour and sword buffs–the Topkapi armoury has to be seen to be believed, with more bows and arrows fromt he 15th-17th century than I’ve ever seen elsewhere, as well as some superb swords and targets, and no photos allowed.  Grrrrr. 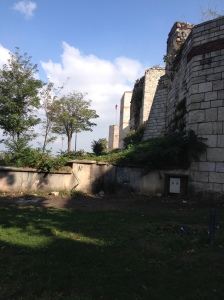 The ancient city walls are from Roman times, and feature several times in the story.  Turney writes about ancient Rome (Marius’s Mules!) and his writing is delightfully ‘aware’ of the Roman past of the city.  The walls themselves are–incredible. 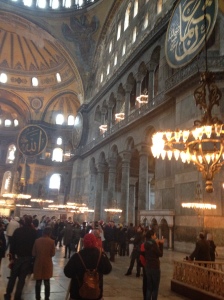 That’s my best photo of the interior of Hagia Sophia, which I confess is not a scene in ‘Thief’s Tale’ (but it is mentioned) but which blew me away…

Anyway–plot and authenticity.  The Ottoman Cycle is excellent, and you should drop whatever you are doing and buy it.  Oh, and go to Istanbul, too.