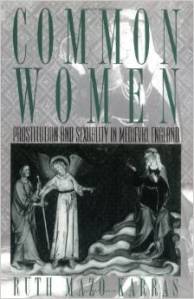 This is not, strictly speaking, a book review of ‘Common Women’ by Ruth Mazzo Carras or of ‘The Cavalry Maiden’ or ‘The Tigress of Forli’ or Ulrich’s superb ‘Midwife’s Tale’ although I truly recommend all four books.

It is more of an essay on writing about women in the midst of war.  I’m going to try to keep this as unpolitical and coldly analytical as I can.  But I have to say, up front–I’m a feminist, and the story I’m about to tell can be pretty awful.  You can stop here, if you like.

War is terrible, and yet many men enjoy it.  Certainly, a great many people enjoy reading about it.  And I confess that I study it and (sometimes) enjoy writing about it.  But to the women of the past–and this cannot be too much emphasized–war was probably the most horrible thing they could imagine, especially when war came over the borders and into their homes and lives.

We live (thank God) in a very different civilization. We have come an enormous distance even from the world of the later Middle Ages.  Women are, in most cultures, no longer property.  Most women in our civilization have broader horizons then the process of bearing children and then protecting them and rearing them until they are adults.  But I think it is only fair to say that for the majority of women in history, bearing children–willingly or unwillingly–was the horizon of their lives.  And forced sex and forced child rearing–rape, and even child murder–were the natural outcomes of war.  That’s what war meant, to most women.

This is not to say that some women didn’t live and even thrive in the environment of war.  For example, almost every Italian source that speaks of Sir John Hawkwood’s ‘White Company’ (or any of his other military companies) mentions the company’s women, who were clearly as dangerous and outrageous as the men.  Women served heroically in the Czarist Russian Army against Napoleon–one of my favorite books in the secret military history of women is ‘The Cavalry Maiden’ by Nadezhda Durova who served as an officer of cavalry.  Women fought in sieges–after all, when a city was sacked, women lost everything–and Blaise de Monluc describes two uniformed companies of women at the siege of Sienna in 1555 (in suitably misogynist terms) while Thucydides, who has no time for women whatsoever, can’t stop himself from mentioning that the brave Plataeans took women with them to defend their city in 427 BCE against the Spartans.  The Lady Orsini, wife of the Prince of Lesvos, owned her own armour and led sortie after sortie against the Turks during the 1442 siege of Mythimna on Lesvos in Greece, winning against the odds. The Austrian camp followers of Marshal Browne’s army in 1757 apparently defeated two regiments of Prussian hussars who had hoped to sack the baggage train with disciplined musket fire.  A single British camp-follower with a musket–a ‘very comely woman,’ as the writer calls her–captured three of Ethan Allen’s soldiers  outside Montreal, single-handed, in 1776.  The Scythians–well, I think everyone knows what an Amazon is.  Or was.

In fact, even a cursory study of military history will show that women have served–heroically–in war for as long as we have records of war.  And where they are absent, I will wager this has more to do with men like Thucydides wanting to keep the ‘Art of War’ as a boy’s club than with women’s ‘weakness.’  Women make great soldiers.  It’s such a banal thing to say that it’s almost offensive to have to say it.  I was privileged to serve in the first generation in the US Navy of women on combat ships.  My OCS class was dominated by women who were, let’s face it, mostly a cut above the material provided by the male gender in my class, and the top performing officers I saw at most duty stations were women.

Sadly, women warriors have never typified women’s experience of war.  Most women who followed armies did so as laundresses, cooks, and sex-workers, willing or unwilling.  Their unromantic lives were dirty and dangerous, and full of hard work around a lot of men already marginalized by violence, and while for some it was probably better (god help us) then village life, for others it must have been a living hell–rather like being kidnapped by a bike gang.  And then there was always the possibility that the other side might triumph in battle, and storm the camp.

‘Common Women’ is a difficult book, but one worth reading if you are going to write about women in army camps and cities.  It is about prostitution and Medieval attitudes towards whoredom, and it is not pretty.  It describes what the lives of such women were like, at least through the eyes of the courts and the church.  It suggests–almost commands–that we accept that women did not own their bodies–that men owned women’s bodies. Although I don’t ascribe to every theory in the book, it’s worth noting that the author goes a long way to making the lives of these women real and their perils and place, or lack thereof, in society, comprehensible.

Why does all this matter?  Well, it’s about authenticity.  I find it–interesting–that people (not just men) with cheerfully read about a young man pressed into military service (we call them child soldiers now…) and we delight in this person’s gradual rise, through successful violence, to command and power.  But we’d probably feel sick to the stomach if the same book were about a young woman’s life as a captive sex-slave, gradually rising through a sort of vicious survival instinct to the ‘power’ of keeping her unwanted children alive in the desperately violent world of an army camp in the later Middle Ages–until she died of the plague, or some bright light like the Chevalier Bayard shoved her and her children out into the snow for being ‘useless mouths.’ Or ‘bad for morale.’

I’d also like to note what a friend commented to me the other day about Fantasy as a genre.  We now call it ‘Fantasy Honour Killing.’  Ever noticed that if a heroine in a fantasy novel gets raped, she has to die?  Like, what message is that supposed to send?  Historical figures like Catherine Sforza prove that women were much, much tougher than that.  Elizabeth Lev, the author of ‘The Tigress of Forli‘ has done a fine job of collecting the historical data around a woman whose heroism (oh, she wore armour and fought, too) was mostly in her tenacious survival–an abusive husband, terror, war–none defeated her.  When Cesare Borgia raped her, she did not conveniently die.  Ten days later, she was negotiating with the pope. 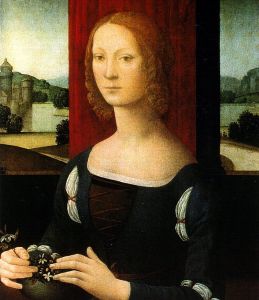 Catherine Sforza — The Tigress of Forli

Statistics suggest that 20% of modern women and 5% of men experience sexual abuse. They go on to live their lives.  My point is, writers, that we can do better than ‘Fantasy Honour Killing.’

But perhaps the best work of ‘women’s history’ (which to me is part of something called ‘History’ and not at all limited to women–homo sum: humani nil a me alienum puto.  But I digress) is Laura Thatcher Ulrich’s Midwife’s Tale.  In this book, Ulrich dissects the diary of a farm wife who is also a midwife to reveal for us the entire world of women in rural 18th century Massachusetts and Maine, and through her (Martha Ballard), to get an idea of how women have probably lived throughout history–raising children, weaving, working, and living.  It not all rape and murder.  Sometimes there’s light and fun and barn dances and heroism, to. (and an incredible amount of sheer work.  40 yards of linen in three days?  Ariadne ain’t in it.) I won’t presume to ‘review’ a book that won the Pulitzer Prize.  I’ll just say it’s one of the three best works of history I’ve ever read.

As I sit down to begin the fourth book of my Traitor Son series, I return to a fantasy world with a great many women in it.  I have tried to write them from all walks of life and many different stations–from Amicia, who was once an Outwaller wife and shaman and is now a celibate nun, to the Abbess, who was once a King’s mistress, and Sauce AKA Ser Alison, who was once a prostitute and is now a knight.  But there are other women–Blanche the Laundress, who has to deal with sexual harassment every day merely to do her job, and Sukey, Mag’s daughter, who lives on the edge of acceptable behavior while managing camp women who are, I hope, at the more cheerful end of the spectrum of sex-workers and laundresses that history shows us.  It is not my duty as a fantasy writer to make all their lives one horrible smear of misery.  But I think I do a disservice to the reader if it is all a ‘bit of fun’ for those nice clean knights.  I want the reader to see that a good military company might depend on women exactly the way a modern squadron of fighter planes depends on its maintenance personnel.  That the ‘love interest’ has a life or her own.  Actually, I want to accomplish even more than that–but that’s a start.

In historical novels, I think my shading of the lives of women has gotten darker.  It is more difficult for me, as I learn more, to resist the urge to tell you, the reader, just how hard women’s lives were.  I found the Sack of Alexandria excruciating to write, because it was all one great war crime.  I try not to write rape scenes–for a variety of reasons, and old fashioned bad taste is one–but I am tempted, sometimes, just to shock the historical reader into a visceral understanding of what the ‘sack of a city’ meant to the inhabitants, and what ‘being sold into slavery’ suggested for the surviving women.

But–I have also enjoyed very much writing about Brauron, the Sanctuary of Artemis that seems to have functioned as a woman’s school and vacation spot and summer camp during the late Archaic and Classical world, and it cheers me to know that young Athenian girls and women could ride horses, shoot bows, and dance.  And that when the Persians came and destroyed the place–they all escaped.  And returned, and rebuilt the temple complex.  Maybe that’s symbolic.

Oh, by the way.  The Pen and Sword Tour for 2015 is on, and Brauron will be on the first day of the tour.  Come on–you know you want to come…

11 thoughts on “Whores and Heroines–writing about war and women”