I love Ben Kane’s books.  I look forward to them eagerly; I get them in hardcover; I’ll eventually meet him and get some of them signed.  (Getting all of them signed seems unlikely, given the decline in international baggage allowance and my near-constant need to get armour into my baggage.  A problem that I suspect Ben Kane shares.)

Because he is as devoted to authenticity as anyone who writes in our sub-genre of military historical fiction. 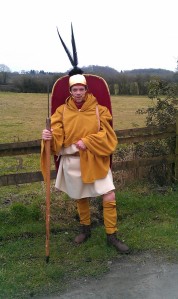 That’s Ben, in Roman Legionary kit, pinched from my friend Robin Carter’s blog.  In fact, Robin will provide a guest post this Friday, as I’ll be in the Adnacrags–er, the Adirondacks.

But… why does authenticity matter?

Well, at least for me as a reader, it’s like this.  Ever see an episode of ‘Sherlock’ on BBC?  When I’m reading Historical Fiction (or fantasy, to be honest) and I come to something I know to be untrue — historically… and friends, that’s just as valid in fantasy, and if you read this blog you already know why–if I hit one of those moments, I have an alarm in my head that sounds like Benedict Cumberbatch saying ‘boring.’  It is boring.  Falsity is boring.  It wastes my time and my effort and entertainment time in reading.

Ben Kane never lets me down.  I cannot remember a moment in a Ben Kane novel where I softly put the book down and hope I won’t remember this bit when I come to pick it up again.  He never causes me to say to my wife ‘Doesn’t he know that legionary crests are detachable?’ or ‘Oh, God, he thinks chain mail is attached to the plate armour?’

Now, honestly, I can also praise all those things real reviewers praise.  Reviewers like Parm (Robin Carter) speak meaningfully of plotting and character and motivation and all that author stuff.  And I agree — Ben has great plots, he does a brilliant job of putting you there and making you believe the story and the characters…

Look, I am an author, and one thing you learn when you are an author is that every reader is different and some won’t like you.  Some will like you for odd reasons and goodness, I hope Ben does not read this and wince.  But the truth is, I don’t really need a great plot to enjoy history.  I know how it ends anyway.  What I want is immersion — a few hours where I’m there.  I could be buying horses in a Celtic horse market, or sneaking up on a Roman outpost, or plotting rebellion against the bloody Romans…  or maybe marching for hours as a legionary with my feet hurting because my hobnails are finally working their way through the bottoms of my caligae.  That’s what makes me a happy reader.  Immersion.  the sense that I’m there.

Now, in fact, I am not one of those readers who snarks at the least deviation from the events of history.  This may shock some of you, and I’m sorry, but we don’t actually know very much about what happened on ancient military campaigns.  We have a handful of histories, all written by people with something to sell — trust me, Thucydides was as much a politician as Tony Blair or George W. Bush, Livy was no better, and Polybius and Diodorus Siculus… well, the less said the better, really.  On most of the key events of the most important military campaigns of the ancient world, we have one or two accounts written in some cases a hundred or two hundred years after the fact.  Osprey books and the like tend to give campaign histories as if they are biblical fact, but we all know the bible isn’t to be taken at face value, right?

There are very few ‘facts’ when we ask hard questions about where horse fodder came from for Caesar’s German cavalry.  Or even, how many of them there were.  But we do know a little of what they wore and what weapons they used, and we can even get pretty deep into what they ate and even what kind of horses they rode.  Those are the details that we know, so when they are missed, its boring.  The day to day plot of the campaign?

And that, my friends, is why it’s such a joy to be a novelist instead of an academic.  And why, in a long, possibly over wordy nutshell, it’s a joy to read Ben Kane.

I asked Ben ‘What skills and life experiences add to the authenticity of your description of the past?’

He replied, ‘Thanks to my training as a veterinarian, I know all about surgery (think animal sacrifice, divination, medical treatment and combat). A summer spent in the Kenyan bush as a student means I know how to slit a throat (a goat’s can’t be too different to a human’s in that regard), and how to butcher a carcase. I learned about hunting with bows and arrows from Maasai warriors. The more than 800 kilometres that I have marched in Roman military gear (including hobnailed boots) have hugely informed my opinions on how legionaries lived. Being a father has taught me how to write about children, in some way at least! ‘

How cool is that?  It is life experience that informs writing–not just reenactment experience, but real life as well.

There are, thankfully, quite a few writers whose work satisfies me completely, and in this blog I’ll touch on them from time to time.  I’ve already mentioned Simon Atkinson Turney (that’s SJA Turney) –you can flip back and read my review of his Ottoman Cycle.  And, over the summer, I’ll probably write more, about some other current writers I really admire–CJ Cherryh leaps to mind, and Glen Cook, and Giles Kristian, and…

4 thoughts on “Good History Writing — In Praise of Ben Kane”