Right. Since my last post, I have learned how to use a Microsoft Surface.  Now there will be photos.

That is out intrepid band on Monte Maria overlooking Rome and the Vatican.  It was a great moment, even with some very sore feet; we walked up Monte Maria and when we reached the top, there it all was.  Two thousand years of history stretched out at our feet.

We started walking at Bolsena, a magnificent medieval town just south of Tuscany, about 100 km from Rome as the eagle flies and more like 150 kilometers by way of the Via Francigena, the medieval pilgrim’s path which we (mostly) followed.  We did the whole thing in medieval kit, with medieval clothes and shoes.  My shoes and Alessio’s were made by Graziano dal Barco.

Truth in authorship requires that I confess that we took a train 8 kilometers to avoid a suburb; walking on pavement is not really very fun or very Medieval.  Also, we received a 30 kilometer car ride from Claudio, the very excellent host at our B+B ‘Etruscan Garden’ in Sutri; we stayed there one night and they treated us like Etruscan gods.  He and his wife Sarah live in a 12th century house which, by the fifteenth century, was the post house for the Roman post; Tom Swan would have stayed there running errands for the pope and Bessarion.

Of course, I didn’t take any pics of their 13th c. house… this is me and Jon Press in the gate of Sutri.  In the rain.  The rain fell and fell, which is why Claudio offered us a ride, which we accepted with gratitude.  Then we walked another 20k to assuage our guilt.

By the way, my half cloak, by Monica at Sartoria Monro (look for her on Facebook) was nigh-on miraculous, shedding water in every storm, and we had more than one.  It got soaked; I did not!

But, as usual, I digress.

Our fourth day we awoke at the magnificent Casali del Pino, an agrotourismo center (that is, a farm with a restaurant and hotel attached) about 12km from Rome.  It was superb; I can’t say the same for the stretch of road and trail from Formello to La Storte, which was ill-marked and at times brutally uncomfortable; about two miles were covered in crushed volcanic rock, which had to be good for some serious penance; then we got to walk through a Roman suburb on garbage day (did I mention this yesterday?) and truly, there are some things that a tourist doesn’t need to see; perhaps the smell was medieval, but I’m not sure.

At any rate, we rose this morning, and with the help of the wonderful woman staffing the Casali del Pino, we went to the train to avoid 5 kilometers more of garbage day and detrained with an 8K walk to the Monte Maria park. 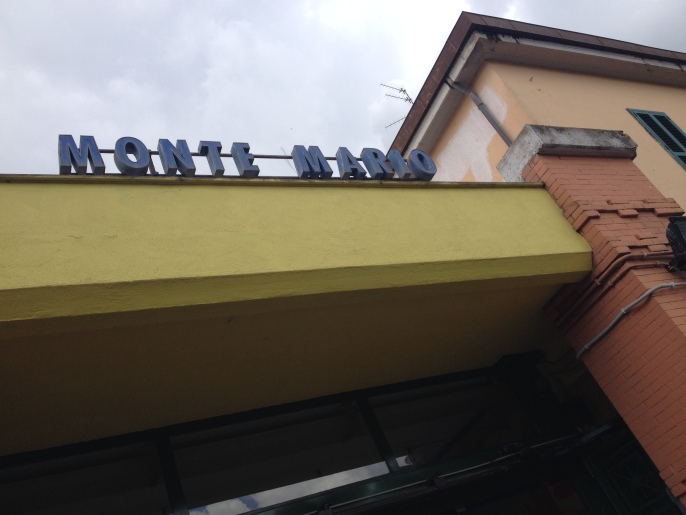 And I also admit that there is very little about the walk to Monte Mari from the train that is medieval; I used Google maps and a carefully downloaded digital layout of the pilgrim route to manage where we walked.

I think that in many ways this is an allegory of reenacting.  There is always compromise; there is no ‘pure’ experience of the past.  There are wonderful moments when the path is good and the wild boar is moving in the forest and the flowers are beautiful, when you can easily imagine that you are  a pilgrim in 1380; in fact, it is even easier to imagine in the discomfort of heavy rain in deep woods, with the trail turning to slick mud under your smooth-soled 14th century turn shoes.

But other experiences are more ambiguous.  Staying every night in an excellent bed and breakfast and drinking excellent Italian coffee each morning, or eating superb restaurant meals (most) nights, was not in any way the experience of the Medieval pilgrim, yet to attempt to have, say, only medieval food, or to do without coffee would seem odd in a recreation where we are walking along a motorway through a Roman suburb, or waiting for passing carts to stop so that we can cross a road.

Fresh water was a constant matter of interest, and that was, in fact, an historical care. Some stretches of trail catered to pilgrims and provided wells and spigots; the Bolsena to Montefiascone stretch, famous as one of the most difficult, had enough water for an army.  Supposedly easier stretches had no water at all, and poor signs or none at all; it amused us that as we entered the City of Rome, the Via Francigena signs ended and the maze of Roma streets was left to the pilgrim’s own (electronic) devices.  All roads may lead to Rome; not all roads lead THROUGH Rome.

Tomorrow if the digital gods allow, there will be another report from Italy.  After all, there was a tournament as well as a group of pilgrims; and the duomo of Orvieto deserves a blog by itself.  Maybe two.