(NB Aristotle is a scholar, archaeologist, and professional guide in Greece.  He joined us to provide language support at Marathon 2015. He has led us on a battlefield walk at Plataea (about 15 of us) and he’s otherwise brand new to reenacting.  I thought, based on some feedback I’ve received, that some of you who are ‘on the fence’ about making kit, spending money, and attending this event might like to hear from a fellow newcomer to the world of ‘dress up with weapons.’ Oh, also: Aristotle is too modest.  He is, in fact, the driving force in Greece towards getting us a site and the cooperation of the locality and the Greek government. Enjoy! CGC) 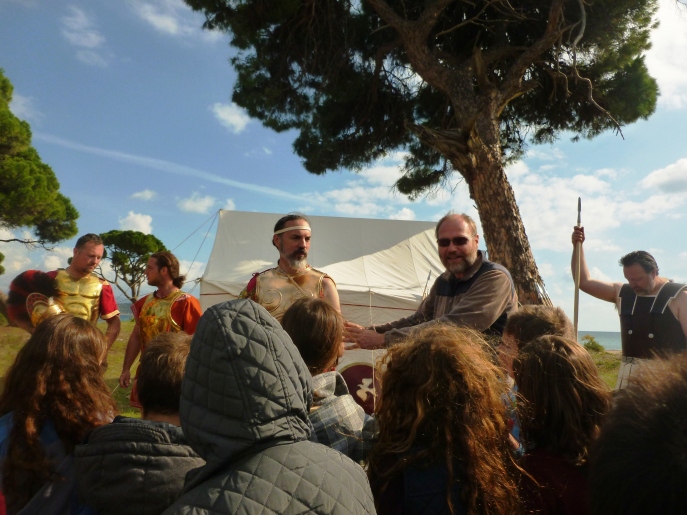 In two years’ time, the reenactment of the battle of Platea will take place at the very plain where it was fought. My aim is to be part of this fascinating event, after a journey that began for me in Marathon (as was the case for many of those who fought in Plataea, 2,500 years ago).

I am the kind of archaeologist who is less interested in art and more drawn to military history and technology. I had always wanted to go beyond theoretical knowledge to another level, that of experimental archaeology and historical reenactment, which would bring me in a more direct contact with the things that I had studied so avidly.

Few groups of historical reenactment exist in Greece, but most are devoted to classical antiquity. Yet I hesitated joining them, either because the quality of their reproductions left a lot to be desired (even without an archaeologist’s eye for detail) or because I couldn’t  agree with their ideology.

It was a surprise for me to learn that in November 2015 there would be an event at the site of the battle of Marathon, held by an international federation of reenactors. A group of guides, including myself, were asked to volunteer as interpreters between the reenactors and the public.

This was serendipity at its best, a dream come true. I was lucky to be assigned to a team of excellent reenactors, such as Christian Cameron, Yannis Kadoglou and Paul Bardunias, among others. Together we showed to several school groups the gear ancient hoplites brought to battle and we talked about how they fought and how their daily life was while on campaign.

This was my first step on the road to Plataea. The next one was at Plataea itself, a few days later, when I escorted a small group of the reenactors to its battlefield.

I didn’t need much more in the way of encouragement to join the reenactors’ ranks. I soon began a process of communication and exchange of knowledge in order to get the gear I needed for the full kit of a Greek hoplite of the early classical period.

I first invested in a shield and a Corinthian type helmet. After many queries and a long online search, I found a used set from Radostin Kolchev, a reenactor and craftsperson in Bulgaria.

But helmet and shield do not a hoplite make. The next year I went forward with the soft kit, namely a chiton and a chlamys. Unfortunately, I am not the kind of person who can weave or cut and stitch leather. I can’t even hold a needle, much less use one. Nevertheless, I wanted my gear to be as authentic as possible, and not use modern textiles. Ι was brought into contact with Aurora Simmons, reenactor and craftsperson, who makes jewelry and historic outfits in Canada. After a long correspondence with her (and with the help and advice of more experienced reenactors) I chose textiles and colors that would be as close as possible to the ones ancient Greeks probably used. The textiles were traditionally woven in the Himalayas with wool from Australia; they then traveled to Canada to be put together according to the designs of a Greek reenactor, based on images found in ancient art and circulated around the world via the World Wide Web.

This odd version of globalization was long, complicated and expensive, but was chosen as an experiment, to see how close one could get to reproducing clothing of the classical period. It is not necessary for a novice reenactor to go to such lengths in search of authenticity – there are textiles that come close to the original and are much more easily and cheaply available. I need to stress here that none of what I did would have been possible without the assistance and valuable advice of more experienced reenactors.

The next step was a pair of sandals and a leather purse, both made by the excellent craftsperson and passionate reenactor Yannis Kadoglou of Alexandroupolis, Greece. The sandals’ design was copied from ancient artwork; as for the purse, I use it to store my small collection of reproductions of ancient coins).

While these last two steps were in process, I informally joined two reenactment groups, the Rheseidai and The Plataeans. Soon they were both abuzz with a discussion about a reenactment of the battle of Plataia; it was decided to hold it in 2021, to celebrate 2,500 years since this pivotal historic event. 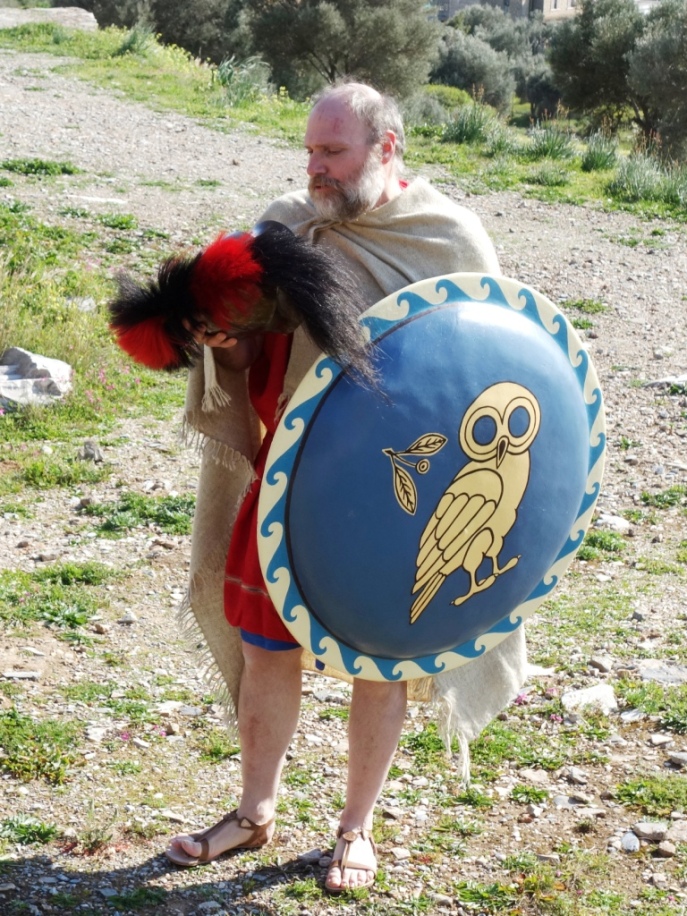 This means that I only have two years to complete my kit so that I can stand in the battlefield of Plataea in full battle gear. I need a thorax, a sword and a spear, as well as a multitude of other things, such as a hat, a cup, and a sack to put it all in. For authenticity’s sake, I’d also need a boy to carry it all, I say looking hopefully at my rapidly growing eldest son, who likes the idea of taking part in the reenactment but is much less enthusiastic about the carrying part.

In the mean time, my gear is not gathering dust: although still incomplete, it has proved itself useful in presentations about the Persian wars and ancient Greek hoplites that I’ve made to groups of tourists or schools.

Among hobbies, reenactment is neither the easiest, nor the cheapest. This can be said of many other things, but starting out is always made easier when there is a team to support the novice and help them in their first steps. My experience has shown me that the community of reenactors embraces newcomers and is eager to support them by freely providing advice and assistance.

Besides the immense personal satisfaction that I get from historical reenactment, it has also proved to be one of the most powerful educational experiences I’ve ever had. I considered myself knowledgeable in the practice and technical details of ancient Greek warfare. Yet, through the process of choosing and acquiring my gear, of wearing and explaining it to others, I experienced firsthand things that I only knew theoretically before and learned others that I did not know. I am certain that I am going to learn much more along the way.

Being able to stand on the footsteps of my ancestors and reenact an ancient Greek hoplite on the battlefield of Plataea will be –to me– a priceless experience. In order to make it I will even try to bring this ageing and less-than-athletic archaeologist into shape.

I hope you will join me in sharing this unique experience.

(My right hand is healing nicely and I’ll be back to write my own blog next week. This blog will also be migrating to my ChristianCameronAuthor.com site in the next month… please look for it there.And feel free to join up for Marathon.  The next blog will be about where to buy kit, especially long lead time items that, quite frankly, you may wish to order now!)