The archer in the purple cote is one of the best reenactors I know.  His name is Robert Sulentic, and he’s one of my oldest friends.  When he and another of my oldest friends, Steve Callahan, joined our Medieval ‘Compagnia’ I knew we had a going concern.

I think I’ll try and explain why, and then talk about how they, and other friends, influence writing.  But look at the picture and try and guess which character in the Red Knight is based on Robert.

This is my friend Aurora Simmons, featured elsewhere on my blog as a craftsperson.  Also one of the best reenactors I know.  Also a major influence on writing.  Again, have a guess which character she might influence.

So… here’s the thing.  Almost EVERY character in my books is based on a real person.  In fact, I can’t imagine how people write ‘made up’ people.  I will confess that when I started writing, I would klooge people together; I’d say ‘Well, that’s this person’s macho with that other person’s intellect.’

But that turned out to be very, very artificial.  It turns out that each person represents a sum of all their experience and genetics, and you can’t pick and choose.  In effect, we are what we are.  To be totally trite, beauty (and ugliness) carry consequences.

I’ve known people who’ve done all those things, including the war crimes.  I have, in fact, met whores with hearts of gold, but they were tough people who had managed to remain unscarred by horror.  I have yet to meet a person who committed war-crimes and is still affable and preserved any virtue.  Most are severe paranoids who justify their own sins by imagining the sins of others. And hating.

This matters, for the writing of character.  For the creating of ‘bad guys’ and ‘good guys’.  Before I go on, let’s look at good guys and bad guys a little.

Modern politics, you may notice, is a sort of theater of the real almost totally devoid of good guys and bad guys.  Now, I note that many readers like to imagine that some political viewpoints are superior to others, and I further note that modern day Americans (especially) have a habit of pretending that one side is ‘stupid’ while the other side is ‘right’ but I have to note that there’s no historical evidence to suggest there’s a sign of ‘good’ or ‘bad’ to any political party in history going back to Ancient Athens, but there’s an incredible amount of venality, greed, propaganda, and self-serving crap dished out by every political party that’s ever existed.  So in my fantasy worlds and in my historical, I try to eschew ‘Persians Bad/Greeks good’ because I don’t see a sign of that.  ‘French bad/English good’ is equally asinine.  I try to give Aristides and Themistocles equal time to be ‘great’ (and to spout crap) because that, to me, is how people work.

I have met two presidents and briefed one.  I have spoken to Margaret Thatcher; listened to her outline war policies and strategy to George Bush (she was at the time a private citizen).  I have listened to innumerable admirals and generals debate pretty major military decisions.  I’d love to meet the current pope and interview him.  Mostly for my Tom Swan writing.  He’s hardly the first liberal pope…  he’s in a great historical tradition.

But as usual, I digress.  Maybe I need a separate blog on bad guys.  What I meant to say is, ‘bad’ is a limiting factor, because when people go ‘bad’ as in child raping, war-crime committing bad, usually they just planted the seeds of their own destruction.  Not to mention that, unless there are very special circumstances operating, stupid, ignorant, bigoted people make poor leaders and usually get a knife in the back.

All that said, my ‘bad guys/girls’ don’t come from my friends.  or from people I disliked.  Sadly, they come from me.  Mostly, I think of what I dislike most in myself and embroider like mad, which is deeply annoying.  If you read ‘Alexander, God of War’ a lot of what’s awesome about Alexander comes from an incredibly gifted squadron commander I knew, but the dark, nasty parts are all me.  Mmmmmm.

But today was meant to concentrate on the ‘band of brothers and sisters’ with whom I generally surround my protagonist/s.  And this is where I get to ‘writing about friends.’  Because the protagonists friends are going to be the points of view through which we most especially see our hero or heroine, and because they reflect her and reinforce him and yet need to all have their own story and their own reference and motivation.  And this is where only real people can provide the delightful inconsistency and rich, confusing melange of behaviors that make characters fun.

Side note…  someone said in a recent amateur review that a particular character was inconsistent… I laughed out loud.  Maybe because I’m 53 I’ve discovered that most people are touchingly inconsistent and I want to say so in books…  but anyway….

Greg Mele.  Well, the green chap is me.

Friends, that’s who.  I sort of have a warning now, like, ‘You know, now that I’ve spent a week camping with you, I suspect you’re going to crop up in a book.’  Above, that’s me in Green with Greg Mele in red.  Actually, just at that moment, I guess he was the Red Knight.  Anyway, we’re friends now, and suddenly he’s cropped up in a book.  Not as the Red Knight.  And rather on purpose.  You can get to know people very quickly when you fight with them.  It’s very… intimate.

And back to Bob.  Steve cleverly avoided being in all these photos…  anyway.  Bob contributed most of No Head, although he has contributed to Cully, with my author friend Mat Heppe.  (See, I still sometimes do the patchwork thing.  Hmm.)

Why does it matter?  Well, let’s try a few authorial thoughts.  A Mercenary company has hundreds of people in it, and if you render them faceless, it’ll seem wrong.  In fact, the process of command is literally not much more than knowing all the people who work for you, and little things, like the constant loans John Hawkwood paid out, and how much time he spent on ransoming his people, tell me he worked hard for his troops.  I want you, the reader, the get the casual intimacy of a well-run military unit; the way people begin to build identity on membership, on shared experience.  I can only do this with a big cast.

At the same time, the characters have to have some individuality.  How?  I mean, really, when you say ‘and then there are 200 archers’ how on earth do we give them individuality?  they are archers, for goodness sake.

Names help.  Cool names, that are short and easy to remember.  I really am not good at this, because I like historical names and I love Ancient Greek.  Sorry.  Really.  But all my archers are named after the stray cats in our neighborhood, and each name on the roster…yes, I have a roster… is associated with one of my friends.  This helps me in so many ways.  Short or tall?  Snappy dresser?  Shines his kit?  Treats his kit like crap?  Late for parade?  On time?  Temper?

See?  I just created a company of mercenaries.

Ok, it helps that many of my friends are military veterans, and it also, to be honest, helps that they’re all reenactors and they are patient with me…

Sorry I wasn’t kidding about cats, and if you think a second, there’s Bad Tom, Long Paw, No Head…

Guess which character HE is?

But No Head has Bob Sulentic’s body, his sense of humour, his interest in engineering, and in fact (I asked permission before writing this blog) I just borrowed the story of how he met his wife for No Head in book four.  This allows No Head to be more than a cardboard cutout of a character.  It allows him to live and breathe, to make decisions, have motivations, and I always have a yardstick by which to measure the character.

And then there’s killing your friends.  My buddy Jevon…

… he died in Washington and Caesar, and he was not pleased. 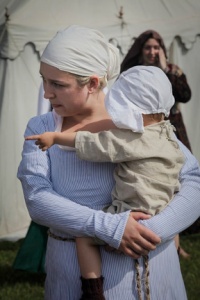 Jenny Carrier is not just a friend but the daughter of an old friend.  Her character got to die in childbirth.  I didn’t know at the time that she was pregnant.

Ok, that was dumb.

Luckily, they all still speak to me…  and go to reenactments.  And go camping.

Thanks, friends.  Without you, I’d have nothing to write.

Oh, last bit… Bob Sulentic came to the deed with a purple cote.  It’s very interesting, visually; authentic, but very visible.  Now No Head has one too.

3 thoughts on “Writing about Friends”