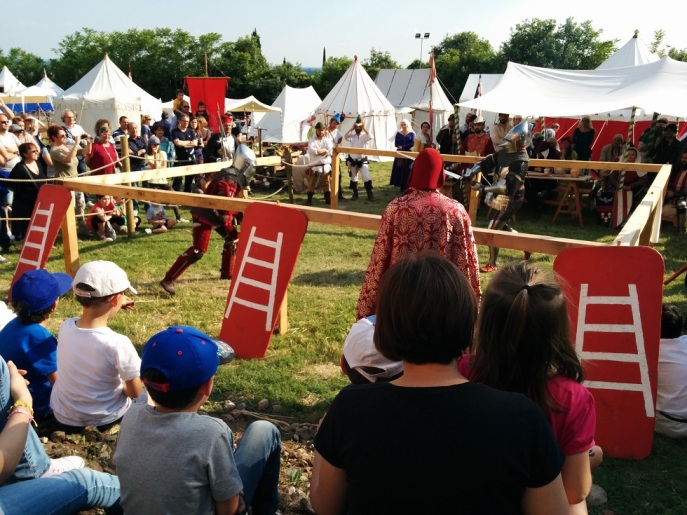 That picture is of the Torneo del Cigno Bianco, or the Tournament of the White Swan, held every year in Verona, Italy.  This year, the Torneo will be held from 3 June 2016 to June 2016.

I’ve spent a year recovering a shoulder injury, and also making my harness better; that is, upgrading my armour so that it is both more authentic to my chosen period (1385) and a better fit for my body and my fighting style.  I’ve worked with Andrey Galevsky and Jeffrey Hildebrandt and Aurora Simmons and Craig Sitch and perhaps most of all, Jiří Klepač to make all my armour and all my other kit as authentic and beautiful as could be done with the time and money at hand.  There will be pictures, once I have it all on…in Italy.

But the Torneo is not just a peak experience because of the armour or the fighting.  It’s immersive.  For two or three days, in Italy, I get to live something of the life of a Medieval knight-errant; from food and dance to the buildings and the lists, there’s very little to take your mind out of the Middle Ages except possibly the tourists.

But even the tourists are wonderful; full of enthusiasm, and excellent questions about wearing armour or the danger of fighting in the lusts (not that great, by the way) or the difficulties of transporting it all on airplanes (fairly difficult, I admit) or the problems of using the toilet.  Oh, yes.

They are fun, and public education is one of the major reasons I do all this, so I’m happy to have them there.  They also add to the immersive experience, because when you fight in front of five hundred people, it’s a very different experience from fighting in front of ten or twenty; the crowd noise is remarkable, even through your helmet.  You also realize that fighting looks very different to the crowd than it does to you.  I remember in a past tournament, landing a very pretty blow in my opponent.  He (unintentionally) then landed a very late hit to my helmet; that is, he sort of ‘swung after the buzzer.’  The crowd roared for his blow, which ‘looked’ better than mine.

In fact, a very Medieval moment.

So, three days at the Torneo.  Three days for which I have prepared for months, if not years. I’ll post a blog with pictures after the last day.  And then…

Well, and then, with my friends Jon Press (who plays one of my squires) and Alessio Porto (man-at-arms) and no armour whatsoever (but in Medieval kit) we will walk to Rome as pilgrims.  Now, I freely confess that we are NOT walking from Verona to Rome.  I’d like to, but I don’t have 45 days.  I have 5 days, so we’re only walking from Bolsena on the Tuscan border to Rome.  The distance is 136 kilometers. We will be walking on the Via Francigena, the Medieval pilgrim route from France to Rome that men and women have followed… well, since before the time of Christ.  The route is ancient, and follows the same road that, for example, John Hawkwood‘s White Company (under various names) moved between Rome and Tuscany fighting for various masters.  The same road that William Gold takes repeatedly; that Tom Swan rides up and down almost every story. I’ve seen it, but I’ve never walked it; never eaten the food or drunk the wine.  And 30 kilometers a day will also, I suspect, be an experience.  Living in my Medieval kit for five days of hard walking (and no modern change) should raise some eyebrows, and will no doubt have less than ideal moments (rain without gortex) but that, too, is part of immersing yourself in a time period.  Medieval people in wet weather were wet.  Not wet through, unless they were awfully unlucky; wool is good stuff, especially if it has some lanolin left in it.  But in Tuscan heat, we may be as wet from the inside out as the outside in.

Those are my Pilgrim clothes.  That’s Lotbiniere, Quebec, and I’m with my friend Bernard Emmerich.

So… another immersive experience; no less physically challenging, and in fact, has required the same amount of preparation, both physical and in terms of kit.  No weapons, no fighting, no pretend; real canteen, real clothes, real shoes, real 30 kilometers a day. I make this point at least in part because I think that reenacting vastly over-emphasizes conflict and war; people had a lot of other things to do in the past. Pilgrimage is an entire subject unto itself; fascinating because of what it says about the human mind, and about contact with the spiritual and the past; in a way, all reenactment is a form of pilgrimage.

And of course, we are ‘actually’ going to Rome. I’m ‘actually’ an Anglican, but I have no hesitation in visiting and venerating the Christian holy places of Rome, both as a reenactor and as a modern person.

As a writer, I will blog every day from my inn, hostel, or B+B about the day’s walk, and sites along the way.  I’m allowing myself 5 photos a day.  It’s a mindset thing; when I’m walking, I can be very much immersed int he countryside, even when 18 wheelers grind their gears or use their air-brakes; but once I get my Iphone in my hand, I’m out of my experience; I’m a tired older man in wool and linen on a hot day.  So I prefer to keep the device to a minimum.  In the evening, at a modern B+B, I’ll be happy to sit back and post a few paragraphs on the experience. I hope you come along and enjoy it, or even laugh quietly.

After Italy, I’m going to England.  I don’t actually expect to be in any of the various pasts while I’m in England, but I will be at the ‘Reading the Wall’ conference in Newcastle-on-Tyne June 15-17 as a speaker. I’d be delighted if you wanted to come; I’m speaking the first day with Garth Nix (!!) and I suspect that he, at least, is worth the price of admission.  If you read this blog, you may already have heard all that I have to say! Tickets for the keynotes are available here.

I’d be delighted to see any of you, and in fact, I’ll have time Wednesday and Thursday to meet people and talk, whether about books or reenacting or philosophy or whatever comes up.  Religion? Chivalry?  And really, I want to use this opportunity to say that one of the reasons that I enjoy the Torneo and the pilgrimage and the conference is just that; meeting kindred souls and talking, which may, after all, be my favorite activity.

After The Newcastle conference, I’ll be spending ten more days in the UK with my wife Sarah and daughter Beatrice, and we’ll be int he Lake District, which, if you don’t already know this, with Hadrian’s Wall, is a major feature of the Traitor Son books.  The land north of Albinkirk in the Red Knight’s world is a blend of the Lake District and the Adirondacks of upstate New York; in fact, if you imagine that Albinkirk is Penrith or Kendal (roughly) and that instead of flattening out into the borders, the terrain merely gets rougher and more mountainous, you have it.  As I’ll be getting ready to write the final volume of the Traitor Son series (book 4, Plague of Swords, is done and edited and in the very last stages, so my various reenactments and then a week in the crags of the Lake District will be the final preparation for ‘Fall of Dragons,’ the series conclusion).  And also for the next William Gold novel, part of which will happen in Medieval Cumbria (and the rest in Italy). (Book 3, The Green Count is already done and in) 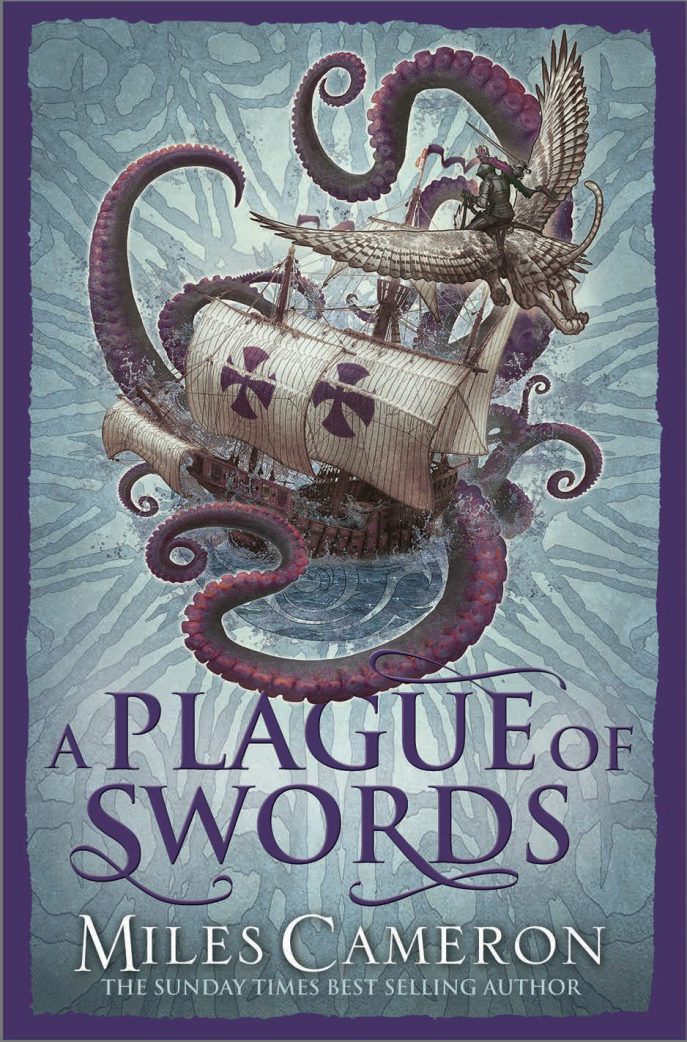 Honestly?  I love this cover and just wanted to put it up again 🙂

And for fun, here’s one of the places that inspired Traitorson:

Here’s Fort Ticonderoga, ie the castle of Ticondonaga.  See how it could sit on Coniston Water?  Even if it is in the Adirondacks?

And finally, here’s a view of the hillside and valley where a certain hedgehog washerwoman lives and works, and clearly a place Beatrix Potter loved.  My family love it too, and Lady Helewise’s manor sits down there among those feels. it is, as you will soon read, a difficult place to land a Griffon..

I have several other reenactments and immersion events planned for the later summer, but I’ll deal with those in a separate blog.  For now, it is enough that I’ll be blogging (not at this length) almost every day starting June 3rd.  I hope you come and read it.  If you do, you’ll probably be able to see into the process by which I learn history, create fantasy, and write.

And I hope to see some of you on the way!

5 thoughts on “My Summer Recreating the Past”