With thanks, as usual, to Celia, champion photographer to the armoured fighting class. BTW, neither of these gentleman are me.  That’s Greg Mele of the Chicago Swordplay guild against Marc Auger of the Barrie Swordplay Guild and Hoplologia in Toronto.  You can just see Jon Press, my awesome squire and marathon runner, in the background between them.

In four days, I’ll be fighting in Verona.  I spent most of today prepping my armour.  OK, I also went to the bank and got euros, and I did some legal stuff so my wife could bring our daughter out later, after her exams, and I jumped through various other modern hoops.

Then I went to the basement.

Waiting for me were several simple jobs. In describing them, I hope I help readers and writers understand the sheer complexity of system that is a harness, or suit of armour.

First, for some weeks, with help from Handmade Revolution Jeweler Aurora Simmons, I have been replacing the straps on my corazina or brigandine.  Today I made repairs, re-riveting in places where the fabric had separated from the metal.

Care to guess which buckles and straps are before and which are ‘after?’

At any rate, I’ve worn this piece of armour precisely twice, once to fight, once to look pretty. I’m repairing it.  These repairs take hours.  And they are not the fault of the maker. Repair is endemic to armour.  Much of a late 14th c. harness is laced to your body; laces break.  They have to be repaired or replaced; often they just vanish.  (I always take about 30 extra laces with me.  They are called arming points, or points.  They go to the sock multiverse… you know the sock multiverse?  So you send socks into the washer and dryer, and there are fewer socks after the laundry than before.  The missing socks are in the n dimensional space called the sock multiverse, and it appears that arming points go there too.  Hypothesis, but not, I admit, proven fact.)

Today I also riveted on a tiny ring.  You’ll never see it; it’s at the base of the back of the corazina, and it allows me to lace the point of my rondel dagger scabbard to the middle of my back.  This is, for North Americans, EXACTLY like a gunfighter tying his holster to his leg.  Tying the bottom of my scabbard means that when I go for my dagger, it will draw smoothly.

In storybooks and Hollywood, no one ever worries about a smooth dagger draw.  (Actually, no one ever binds an opponent’s sword arm and goes for their dagger, so why worry?).  In my recent life experience, fumbling dagger draws is my daily bread. 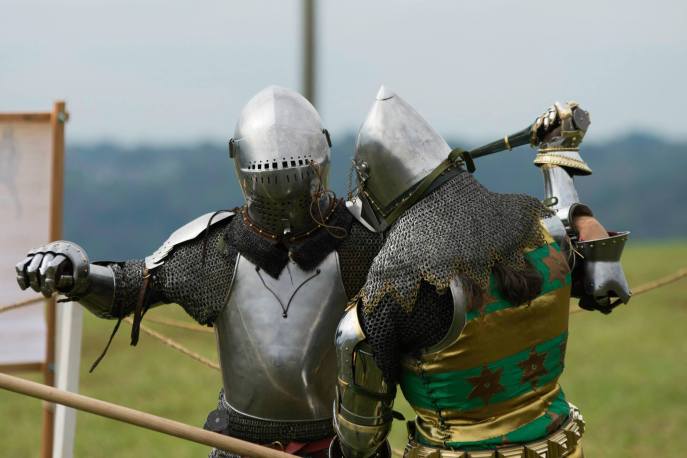 That’s me, about to plunge my rondel dagger into Sean Hayes, while he is about to try and get the ligadura or arm lock on me.  See anything interesting?

The scabbard is still on the dagger.

Because I have ripped it off my belt.  I’m 53, I’m not that strong, and I’ve just ripped the damn thing off the mounting rings on my fancy plaque belt because for whatever reason, the dagger wouldn’t leave the scabbard.

But wait, there’s https://www.facebook.com/plugins/video.php?href=https%3A%2F%2Fwww.facebook.com%2Fpetra.hall.18%2Fvideos%2F10153633692971608%2F&show_text=0&width=560” target=”_blank”>more. If this link works, you should see me fighting with Andrew Lowry at our spring practice event (I’m really not good at video) and at second 40 or so, you’ll see me fail to draw my dagger; it’s fallen from the sheath. That’s right, friends; I’m fighting to the death (really, to the ‘fun’ but you get my thought) and I HAVE NO DAGGER. In this case, and somewhat novelistically, I manage to re-arrange my bind and stab my opponent in the throat with the butt spike (slightly padded rubber knob) of my pole axe. As I then tell Andrew, this WILL occur in a novel… it’s so damn painful to have your opponent in a lock, go for you dagger and..and…and.  You can’t see; you have only your practice to tell you where the dagger is.  And where the hell is it?

And the exciting decision point; keep looking?  Or let go?

Anyway, these are just two of my adventures with daggers. There are others; recently I perfected a very safe dagger, which I loved; I broke it on a friend… the draw was good, but the dagger itself was faulty. Sigh.

And this matters, because I can’t use rubber bands or duct tape.  I have to make my dagger scabbards the way they were made in the Middle ages; wood and leather and maybe a metal chape (the pointy end) for a rich guy.  And I fully admit I tried super-powerful magnets once.  Nope.  Lost that dagger, too. And rare earth magnets are not at all Medieval.

Because I seek that experience… the real thing…

Yet how my dagger hangs on my belt and whether it is available to use is a matter of life and death.  In 1380.  And I want to share that experience (minus the death; no macho here).  And because I train to use the period techniques; what we call Armizare, or the martial art of fighting in armour, my dagger is a very important weapon, because it is what allows me to face bigger, stronger people in close.  They go for grapples and throws.  I try and stab them. (Paper, scissors, rock.  Long sword or spear, dagger, wrestling).

So I spent a lot of time in the basement working on a new dagger scabbard for a new dagger. And then putting it on my belt, over my corazina, and then riveting that little ring to the back of the corazina so my scabbard cannot flit upside down and drop my dagger on the ground.

Fighting in armour is a game of inches.  It is about fitness, but also fit.  It is about freedom,. but also about limitation.  How far can I swing mys word?  Can I take this guard?  How much speed does extra protection cost me? Can I reach my dagger?  Can I draw my sword? Does something hurt? Usually it is greaves; they hurt your instep unless they fit perfectly,and they did in ancient Greece, too.  Or gauntlets; they have to fit.  perfectly.  If they don’t, you won’t be in pain.  You just won’t fight very well.

Helmet fit?  that’s not just comfort, that’s vision.  The difference between ‘can’t see much’ and ‘can’t see a damn thing’ is vast. Breast and back fit?  If not, your reach is limited and your breath is cut off.  Legs fit?  If not, you can’t walk; can’t glide, or make a passing step, or move confidently. Arms fit?  I once fought 10 straight fights in arms that did not fit.  Despite the best efforts of my noble squire to tie them higher, every blow I threw caused the base cannon of the right vambrace to slam into the base of my hand. By the end of one fight, I can be seen on video actually flinching from the pain I’m causing myself.

And then, say it all fits.  Say the miracle occurs (or you know Jiri Klipac or Jeffrey Hildebrandt or some other miracle worker).  Now, every time you wear your armour, you need to repair it.  And of course, you cannot change weight; nor bicep size, nor quad size.  I mean, you can; there is actually some forgiveness, but no lifestyle change.  And constant upkeep; tinkering to get everything just right.

There are other folks who fight in armour in different venues and systems, like the Battle of Nations, and the Society for Creative Anachronism.  They have different rules (howl all you like, happy to explain) that do not exactly reflect the realities of Medieval combat.

(Aside.  All Martial arts sparring is a simulation.  No simulation is accurate.  Every form of simulation makes a set of compromises to reduce risk of death and injury and cost.  The SCA uses rattan instead of steel.  The Battle of Nations forbids thrusting. My form, Armizare, uses steel weapons and allows thrusting and grappling and wrestling, but we discourage full weight blows, allowed by SCA and BoNs, and we require a high standard in armour; full face protection to a very fine level and maille protection at all joints and gaps. This raises the price.)

I’m not on this pulpit to speak against either the BoN or the SCA; actually I belong to the SCA and I have many friends in the BoNs and have fought quite happily with many fighters in both orgs.  I’m here instead to speak of a similarity; armoured combat. The experience of wearing armour is a remarkable one; the feeling of invulnerability is not false, and neither is the staggering energy expenditure.  The constant balance of cost, fit, weight, and protection is an historical experience, even if you have neoprene arming garments; there are a spectrum of levels of material culture excellence, but all of them involve a fair commitment of time, energy, fitness and safety. From them, armour wearers can glean a fairly broad spectrum of experiential data about the life of armoured warriors in the past; they can also play games with weapons that you simply cannot play without armour.

Like stabbing people in the neck with a steel dagger.

And finally, people don’t fantasize about ‘knights in shining armour’ for nothing.  You look…fantastic.  Almost everyone does.  THIS MATTERS.  Napoleon’s Old Guard wore dress uniforms into battle; Royal Navy officers did the same.  Looks do matter, and very few things look better than a complete suit of shining steel.

Except maybe a silk velvet covered corazina.  I had a point a while back… probably time to go polish armour before I think of something else.  Next blog will be from Verona. Oh, and please pray for the rain there to stop.  Thanks.

8 thoughts on “The Experience of Armour”